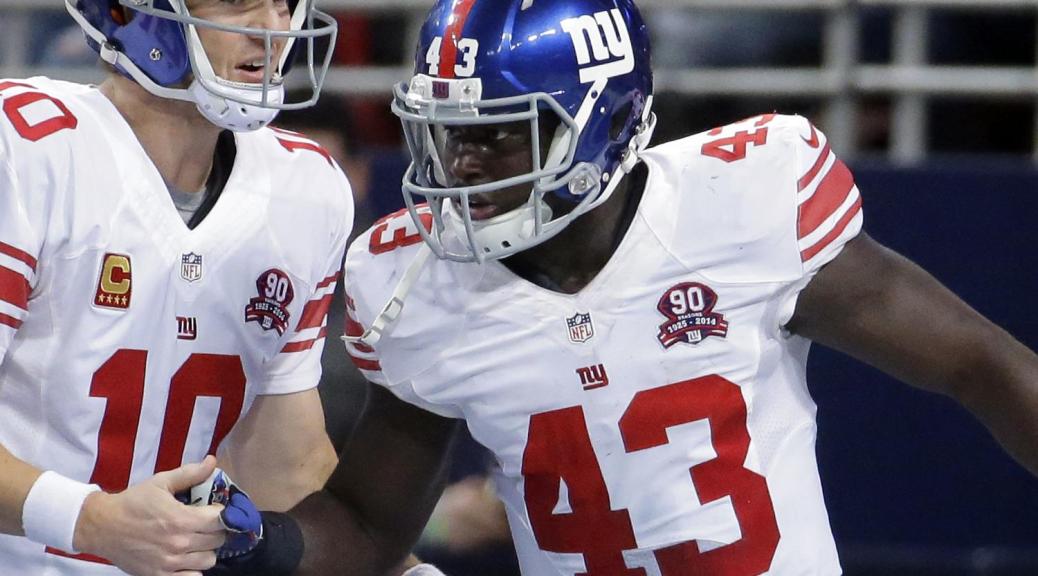 Orleans Darkwa is a running back for the New York Giants. He was born on February 28, 1992 in Nashville, Tennessee. He played his college football at Tulane University, where he amassed 2,953 yards and 39 touchdowns on 663 rushing attempts in 46 games played. His 39 career rushing touchdowns are the most in Tulane football history.

Darkwa went undrafted in the 2014 NFL Draft, but was signed by the Miami Dolphins shortly after the draft. About midway through the season, he was cut by Miami and then picked up by the New York Giants. He scored his first career touchdown in the Giants’ 37-27 win against the St. Louis Rams in Week 16 of the 2014 Season.

New York Sports Hub recently caught up with Orleans Darkwa to discuss his difficult rookie season, life as an NFL player, and more.

Matt Tomaszewsky (M.T.): What is the process after not being chosen in the draft? What did you do to get yourself signed to an NFL team?

Orleans Darkwa (O.D.): That was more my agent. I mean, I spoke with about 15 teams before the draft, so I definitely thought I was going to get drafted, either in the sixth or seventh round. After the draft, my agent made calls and teams called, and at the end of the day, we had a decision as far as where we were going to go. Being a free agent is a good thing because it gives you options, and everyone wants to get options.

M.T.: You were first signed by the Miami Dolphins. What were you feeling after finally joining an NFL team?

O.D.: I was relieved, but I knew my job wasn’t done. The first step was getting signed, and the second step was making the 53-man roster. It was a tough process at first. I had tunnel vision. I had to make sure I was able to grasp everything, know my role, and impress the coaches. I was relieved, but at the same time I still knew it was the first step. I had to make sure I could go out there and fulfill the dream I’ve always had.

M.T.: The Miami Dolphins cut you from their roster a few weeks into the season. What was going through your mind after being cut?

O.D.: I was kind of shocked about it, but not too much in shock. I knew how this business works. Just because you’re on the 53-man roster doesn’t mean you’re guaranteed to stay all 17 weeks. It was all a blur at first. The day after, [the Dolphins] called and signed me to their practice squad. It was a good sign right there that they still wanted me. I had the same mentality to go out there and work hard even though it was the scouting team. I was treating each practice like a game to try to perfect my craft. I stayed optimistic.

M.T.: The New York Giants signed you on November 12th, 2014. What were your initial thoughts on joining the Giants? Were you scared of the bright spotlight of New York City?

O.D.: I needed to adjust. It was only my first year and I was so used to Miami, so it was like starting over. It was a whole new lifestyle, getting adjusted to the practice schedule, coaches, and playbook. I wasn’t scared of the bright lights, but I didn’t know what to expect at first. They wanted me for a reason though, so I was glad to have the opportunity to be back and I wanted to make the most of it.

M.T.: Was it hard to get all your things ready to leave for New York so quickly?

O.D.: It was pretty hard. I had to leave the same day I got the call, but I didn’t have to leave until that night, so I had some time to get ready. I tried to get all of my stuff together. The Giants organization did a great job of having a place set up for me to take care of me for the first week, and then I would be on my own. They did a good job of assisting me as far as where to be and they put me in a good place close to the practice facility. It wasn’t too much of a hassle. I just needed to make sure I had all my stuff packed. But it wasn’t too bad; the Giants were good.

M.T.: How difficult is life as a rookie in the National Football League? Was there any hazing that came along with being a rookie?

O.D.: (Laughs) There’s not much hazing. The guys are pretty nice. But as a rookie, you’re going into a whole new lifestyle. You have to learn the whole playbook and just get adjusted to the NFL lifestyle. A lot of people have never seen this much money in their lives, and understanding what to do with it is tough. You’re going to get calls from people asking for money. They think I’m making millions, but I’m not Odell [Beckham Jr.] (Laughs). The consensus is that you’re rich and people are going to be around you and going to want to talk to you all the time. I’m a nice guy. I don’t like to send people off. I’d like to help as many as I can, but with the schedule, and being in this company, you can’t appeal to everyone’s wishes. That’s the most difficult thing. Don’t be afraid to tell people ‘no’ or else they will run you dry. Another thing is adjusting to the speed of the game. As a running back, you have to be able to do all three things: running the ball, catching passes, and pass protection.

M.T.: What are some of the difficulties in joining a new team halfway through the season? Was it difficult becoming comfortable with the guys around you in the Giants’ locker room?

O.D.: With the Giants, they accepted me from day one. From Eli [Manning], to Odell [Beckham Jr.], to Spencer Paysinger, everyone accepted me. [Devon Kennard] is a good friend of mine who I trained with in L.A. before the draft. After that first practice, the defense was complementing me on how hard I ran in practice. They accepted me day one. Nobody on the team was hard to talk to. The coaches were trying to help me as much as possible. It was a new team, a new playbook, and I had a short time to learn it. I worked after practice to learn the playbook. That benefitted me. Coach [Craig] Johnson, the running backs coach, helped me out [with the playbook].

M.T.: What was the most emotional moment of your rookie season?

O.D.: Making the 53-man roster for the first time with the Dolphins. I was looking at my phone and saw a random number, and when you see a random number during cut day, you get scared, because that’s what people tell you. But it was actually Coach [Joe] Philbin and the GM Dennis Hickey, and they told me I made it. I instantly began thinking how hard it was to get there. Another emotional moment was the first TD I got, especially since it was during a win. People considered me a longshot to make the league, but then I was out there on Sundays making plays. It’s a tie between those two.

M.T.: Which Giant took you “under their wing” and taught you the most this season?

O.D.: Rashad [Jennings] and Andre [Williams] and Henry [Hynoski]. The whole running back group assisted me. Rashad gave me advice on how to act both on and off the field. He’s a great guy to listen to. He’s a veteran who knows what he’s doing. I try to pick his brain a lot. He’s always looking to help me. Those guys really assisted me in learning the playbook and knowing how to be a Giant; how to be a professional in this organization. Also, my running backs coach, Coach Johnson. He stayed overtime a lot with me. He coached with the [Tennessee] Titans, and I was a big Titans fan growing up. He really helped me in grasping the playbook, helping me get in, and giving me advice. In total, I’d have to say everyone in the running backs room: coaches and players.

M.T.: Football obviously takes up most of your time, but is there anything else you enjoy doing?

O.D.: I’m a big gamer. I’m always on Xbox. I play [NBA] 2k, Call of Duty, Madden, everything. I’d say videogames are big. I’m also really into music. I used to think I could sing, and then I had to face the harsh reality that I couldn’t (Laughs). I like any type of music with good meanings behind it. Those are probably the two biggest things. Other than that, I’m pretty lame. I don’t go out much. I like to relax and rest up as much as possible before training. That’s about it.

M.T.: Is there anything you would like to say to New York Giants fans?

O.D.: Thank you. Coming into this organization, they’re one of the best fan bases I’ve ever witnessed. They’re really passionate. Thank you to everyone who has supported me and the team. I’m looking forward to continuing the fight and taking this team to the Promised Land next year.

New York Sports Hub would like to thank Orleans Darkwa for conducting this interview with us. We wish him the best of luck and much success during the next season and beyond (with the Giants, of course!).