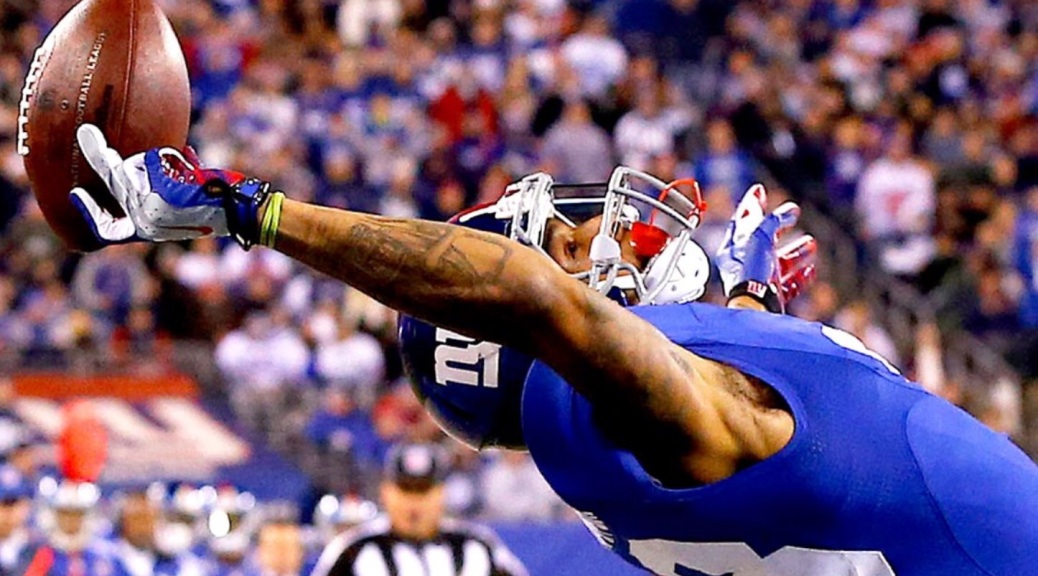 Odell Beckham Jr. had one of the best, if not the best, rookie seasons for a wide receiver in NFL history for the New York Giants in 2014. The 12th overall selection in the 2014 NFL Draft out of LSU, Beckham Jr. missed the first four games of the season due to hamstring issues, but in the final 12 games, all he did was compile 91 receptions for 1,305 yards, and 12 receiving touchdowns.

Beckham Jr. had the catch against Dallas that everyone has watched hundreds of times, still in awe of how he was able to come up with the grab. He is the new cover boy of Madden ’16. Those who didn’t know him prior to his rookie season surely know him now.

Is there a sophomore slump on the horizon?

Prior to last season, 13 wide receivers have had over 1,000 yards in their rookie season. That number is now up to 16, as Mike Evans of the Tampa Bay Buccaneers, and Kelvin Benjamin of the Carolina Panthers, joined Beckham last season as rookie wide receivers to amass over 1,000 receiving yards.

From 1995-2013, eight rookie wide receivers tallied over 1,000 receiving yards. How did they fare the following season?

Galloway was the 8th overall pick in the 1995 NFL Draft by the Seattle Seahawks out of Ohio State. Known as a speedster at Ohio State and his early days in the NFL, Galloway put together a great rookie season which set the tone for a lengthy, productive career. While his receptions and yards dipped a little in his second season, he averaged more yards per reception, and once again produced 7 receiving touchdowns.

His rookie season was clearly no fluke as he played 16 seasons in the NFL. His 701 career receptions rank 43rd all-time, his 10,950 receiving yards rank 31st, and his 77 receiving touchdowns rank 26th.

Glenn was the 7th overall pick in the 1996 NFL Draft by the New England Patriots out of Ohio State. He won the Fred Biletnikoff Award in 1995 as college football’s top wide receiver, so he continued upon his college greatness in his rookie season. His 90 receptions during the 1996 season was an NFL rookie record at the time.

His sophomore season saw a huge drop in his production. He missed seven games during the season, and did not look like the Terry Glenn from the previous season. Glenn had one game where he finished with 7 receptions for 163 yards, but was not much of a factor in any other games he played in.

Glenn was able to bounce back from his rough sophomore season, playing 10 more seasons in the NFL. He reached the 1,000 yard mark three more times after his rookie season, and finished his career with 593 receptions and 8,823 receiving yards.

Moss was the 21st overall pick in the 1998 NFL Draft by the Minnesota Vikings out of Marshall. Despite an unheard of 4.25 40-yard dash, he slipped in the draft due to character issues which saw him get kicked off Florida State’s football team, forcing him to play for 1-AA Marshall.

Moss can also state his case for the best rookie wide receiver season in NFL history. His 17 receiving touchdowns is a rookie record, and also led the NFL in the 1998 season. He continued his dominance in his second season, forming one of the best wide receiver duos in the NFL alongside Cris Carter.

Moss only turned out to be one of the best wide receivers in NFL history. He played 14 years in the NFL, and his 982 receptions rank 11th all-time, his 15,292 receiving yards rank 3rd, and his 156 receiving touchdowns rank 2nd.

Boldin was the 54th overall pick (2nd round) in the 2003 NFL Draft by the Arizona Cardinals out of Florida State. Boldin’s 101 receptions in 2003 is still a rookie record, as he garnered the AP Offensive Rookie of the Year.

The following year, the Cardinals used the 3rd overall pick on another wide receiver, Larry Fitzgerald. The two would become quite the receiving tandem for the Cardinals, until Boldin left for the Ravens in 2010.

Boldin missed six games in his second season due to a worrisome knee, and while his receptions per game was close to his rookie season, he only hauled in one touchdown pass.

Boldin has had a career that will at least get him consideration for the Hall of Fame, as he is still going strong in the NFL after 12 seasons. His 940 receptions rank 15th all-time, his 12,406 receiving yards rank 19th, and his 70 receiving touchdowns rank 30th.

Clayton is the one guy on this list who never came close to duplicating the success he had in his rookie season. Clayton was the 15th overall pick in the 2004 NFL Draft by the Tampa Bay Buccaneers out of LSU.

At least for one season, it looked like Tampa Bay’s first round investment would pan out. Clayton’s 1,193 receiving yards in 2004 is still the 5th most by a rookie in NFL history. All signs pointed to a long and productive career for Clayton.

Or not. For reasons unbeknownst to anyone, Clayton was never the same wide receiver threat again. Clayton has claimed that then Tampa Bay head coach, Jon Gruden, phased him out of the offense without an explanation.

Colston was the 252nd overall pick (7th round) in the 2006 NFL Draft by the New Orleans Saints out of Hostra. Playing college football at Hofstra will not get someone much notoriety, so Colston slipped almost completely out of the 2006 NFL Draft.

Colston became someone to take notice of right from the start, on what has become a steady 9-year career so far in the NFL. Despite missing two games in his rookie season, Colston still was able to break the 1,000 yard barrier.

Colston’s sophomore season proved to be even better, as it still stands today as his best season in the NFL. His 98 receptions, 1,202 receiving yards, and 11 receiving touchdowns are all still career highs.

Colston has had a strong career that is not over, as his 666 receptions rank 50th all-time, his 9,239 receiving yards rank 52nd, and his 68 receiving touchdowns rank 39th. Not too bad for a 7th round draft pick out of Hofstra.

Green was the 4th overall selection in the 2011 NFL Draft by the Cincinnati Bengals out of Georgia. Green was drafted the same season as Bengals starting quarterback, Andy Dalton, and the two have formed quite the chemistry from the get-go.

Green’s 6-4 frame makes him an easy target for Dalton to find, and Green enjoyed much success his rookie season while earning a trip to the Pro Bowl.

His sophomore season saw his numbers trend further upward as he has become known as one of the best wide receivers in the NFL. Green has made the Pro Bowl in each of his four seasons, and has amassed over 1,000 yards in all four as well.

Allen was the 76th overall pick (3rd round) in the 2013 NFL Draft by the San Diego a Chargers out of California. Allen was projected to be a first-round pick, but sprained the PCL in his left knee for California in a game against Utah. Allen missed the team’s final three games, then re-aggravated the injury which forced him to not workout during the NFL Combine.

Allen missed two games last season, but still added 77 receptions. There was just a large drop in his yards per reception from his rookie year, and his touchdowns were cut in half. Malcom Floyd, who has long been quarterback Phillip Rivers’ deep threat, also came back after playing only 2 games in 2013, which may have cut into Allen’s numbers a bit.

Minus Clayton (never came close to matching his rookie numbers) and Allen (two seasons is not enough to say whether someone has had a productive career), all of these wide receivers have had many successes during their NFL careers. Only Clayton and Glenn saw what is often coined as the “sophomore slump.” Green and Colston saw their numbers jump from their rookie seasons, while the other four stayed somewhat on par to their rookie seasons (other than Boldin’s receiving touchdowns).

Only time will tell what Beckham Jr. is able to do for an encore on his AP Offensive Rookie of the Year season in 2014. He developed quite the rapport with quarterback Eli Manning, despite not playing in the exhibition and missing the first four games of the regular season. One also has to keep in mind that Victor Cruz will be back on the field, which may or may not eat into the touches that Beckham Jr. receives.

Beckham Jr. truly looked like a superstar on the field, so it is doubtful Giants fans will have to worry about a “sophomore slump.” It is unimaginable seeing Beckham become the next Mark Clayton. The next Randy Moss? Again, only time will tell.